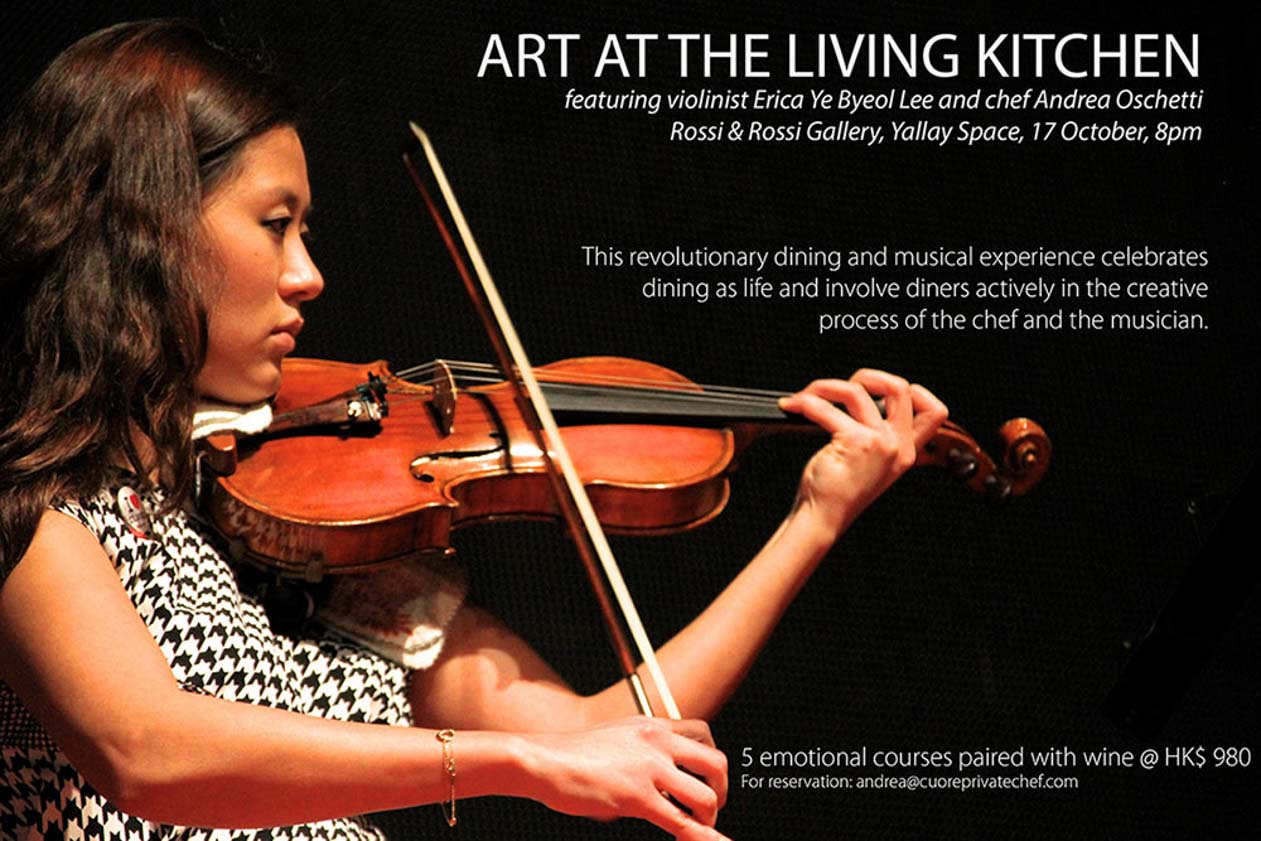 Art at the Living Kitchen

“We’re basically bringing together art and food, and I think there is something in common between the two: emotions” 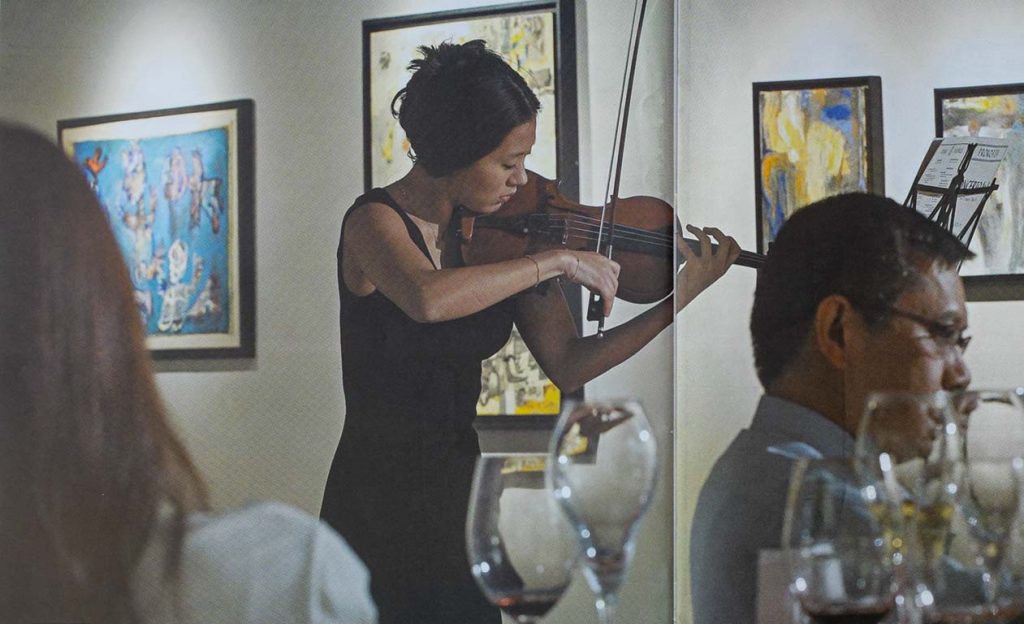 This review appeared on the South China Morning Post

“That was amazing,” a wide-eyed diner exclaims to the table in a whisper. She is not referring to the penne amatriciana, which all agree is outstanding; rather, it was the five-minute violin performance (an interpretation of “fury”) that was paired with the slightly spicy dish that has us nodding in approval.

In a twist on private kitchen culture – which over the past decade has given Hong Kong unconventional settings and imaginative meals to eat in them – tonight’s five courses have not only been matched with brief violin pieces, but are also being served in the centre of a stark, spacious art gallery. And the dinner is not primarily about the taste of top-class food, it is also about the sound of modern, original music and the beauty of the Marc Chagall-like paintings on the walls. The extras are intended to help diners explore something within themselves.
“We’re basically bringing together art and food, and I think there is something in common between the two: emotions,” says Andrea Oschetti, tonight’s chef and host. “So we are exploring using emotions as a way to connect food and music.”

Call it the art of eating, if you like. Foodies and health gurus have long touted the physical and environmental benefits of consuming organic, locally grown, line-caught, free-range produce. Some restaurants, on the other hand, take pride in their use of ingredients from far afield. But if you know where to look, you will find those in the business who want to take guests on another kind of journey – where the focus is not on what you are eating, but how you are eating it.

In the Rossi & Rossi gallery, on the third floor of an industrial building in Aberdeen, the 20 diners sit close together at two tables, surrounded by oil paintings produced by Syrian artists. The violin interludes – composed and performed by New York-trained Erica Ye Byeol Lee – are powerful, but are presented in digestibly small portions. The Italian food is served by a team of waiters and the wine and Fiji water do not stop flowing.
“I’m not sure we’re concentrating in the way they’re asking us to concentrate on the music and the art,” says Steve Randall, whose party of six are celebrating the arrival of the out-of-town friends among their number.
Randall may have inadvertently taken the correct approach, however; Oschetti says one of his aims is to take the earnestness out of both food and art.

“You go to a wine tasting and it’s so serious. It’s more academic than just the pleasure of good wine. And art galleries are about the collections, and everybody pretends they appreciate and understand the artist,” says Oschetti. “I wanted to do something that’s pure basic drawing of pleasure; that you derive from art and from cooking.”

Each diner has paid HK$980 for the gallery experience, and all seem genuinely delighted by the event – all the more so after a few glasses of wine – and by the food.

A cold soup has been matched to the violinist’s interpretation of sadness and a comforting open-faced ham sandwich with mozzarella apparently equates to happiness. After the pasta fury, a wistful piece – about memory, we learn – accompanies a tuna dish.

Finally, Lee plays a piece devoted to love before the dessert: half a poached pear covered in chocolate sauce. “There you have the Breast of Venus,” Oschetti proclaims, referring to the dish’s name on the menu. “With pistachio nipples!”

Oschetti’s follow-up dinner under what he calls “the living kitchen” concept – he plans to host one a month – involved six dancers. He says that organising these events is a labour of love and that he is “not making any money” from them. “The key point is to make something which is absolutely brilliant.” The Italian chef has a more typical private kitchen business, Cuore, which is in the same building as the Rossi & Rossi gallery and is his bread and butter, so to speak.

A small number of restaurants and organisations have sprung up around the world in the past two or three years, offering experimental, sometimes unpredictable dining experiences that engage many or all of the senses.
A number of eateries, for example, organise “dinners in the dark”, in which patrons eat with the lights turned off. Social-inclusion foundation Dialogue in the Dark has been putting on such events in Hong Kong since 2010. Diners may not be able to see what they are putting in their mouths, but the rest of their senses are supposedly more engaged as they eat.

Then there are the likes of Madeleines Madteater, a Copenhagen-based team that stages ever-varied dinner performances. If you are visiting Denmark and are lucky enough to get a ticket, you’re likely to be treated to photo projections, dancing and foot massages in an almost Cirque du Soleil-style setting.

Watching art or effectively becoming part of a performance while eating might seem at odds with the “mindful eating” trend, which has caught on in the West. Rooted in Buddhism, that “movement” is designed to help diners focus intently on the sensorial, from smells to textures to chewing, without talking or having to deal with other distractions. The practice has been used as a weight-loss method – eaters tune in to the sensation of being full and thus know when to stop. But for all the apparent differences, the meditative act of mindful eating and multimedia experiential eating have a common goal: the understanding of the self through food.

“What I love about mindful eating is that the focus is away from the what”, and instead on the how, says Julie Chiu, a Hong Kong-based health coach. Chiu has taught this method of eating to clients and written a book on the subject, Enough Already! Stop Self Sabotage Eating with the Mindful Way Adventure Book, that delivers an eight-week tutorial.

“You’re on an eight-week adventure journey of getting to know yourself,” she says.

This learned mindfulness can be applied to other parts of life and, with practice, can lead to greater appreciation for what one has, Chiu adds. “So you’re not feeling like you’re part of a race, you have to achieve something. You’re focusing more on the process versus the end result or the outcome.”

In Hong Kong, the few dining events that feature an experiential component are even more difficult to find than private kitchens once were. The diners at Oschetti’s event, for instance, are all friends or friends of friends.
“I guess it’s not something people are really aware of at the moment, even people in the restaurant scene,” says Sangok Kim, who, along with two partners, hosted a dinner that combined food with art at the end of September. For most chefs, the experience of eating is “very limited”, adds the Hong Kong-raised Korean. “Presentation, the restaurant environment – that’s how they sell the experience.”

At Kim’s dinner, titled Palette X Palate, guests are asked to get their hands dirty and make art with food – and then eat it. The 15 diners seated cosily around a table in the food shop run by organic restaurant Locofama, in Sheung Wan, are first asked to take items from a basket of locally grown raw vegetables and create sculptures or collages with them on paper placemats.

One of the guests begins painting with the dark juices of portobello mushrooms and bright red dragonfruit, colouring circles in a zen-like fashion. Seeing the abstract art emerge, Veronica Yu Lai-chit, another of the event’s organisers and who describes herself as an “eating experiencist”, suspects this would be a good activity for her children. “My kids are always eating crayons,” she says.

Although not everyone present appreciates this opportunity to unleash their creativity – some cite hunger – it does force the guests to step back and think about what their food really feels and looks like, and where it came from. The activity is also about discovering the connection between colours and nutrients.

“The natural colours of food have properties related to your health,” says Alexandra Tung, a nutritionist and the third co-organiser of the dinner, who gives a brief presentation. Red fruit and vegetables tend to support the heart, she says, while purple ones often help prevent cancer. She says that from both Western and Chinese medical perspectives, foods of specific colours are associated with aiding the functions of certain organs.
The group’s idea of exploring food based on colours was inspired by the work of Sophie Calle, a French photographer who, for six days in 1997, followed a diet involving just one colour per day. Calle did not do that for health purposes but more as an artistic performance, and she created some striking images of the dishes she ate along the way.

Eating to understand health, eating to understand art – it all becomes one during Palette X Palate, which carries a price tag of HK$550 per person. Each of the five courses served is basically monochromatic. There is a green pepper dish and a gazpacho made with tomato, strawberry and a red piece of tuna. When Yu places all-black dishes of risotto, each with a lone scallop in squid ink, before us, she announces they are to be enjoyed in silence – which brings the hubbub to an abrupt halt.
She dims the lights and turns off the music. The food is enjoyed thoughtfully, heads down, but hurriedly, as everyone wants to get back to chatting. When the lights and music come back on, the revelry resumes.
Yu says she tried the experiment because black is associated with solitude. Being forced to stop talking could result in a rare moment of introspection, “especially for Chinese, who love to socialise while eating”, she says.
No one has been paying much attention, but the music in the background has been chosen to match the courses and enhance the dining experience.
“I guess the word for it is synesthesia, where all your senses kind of merge into one,” says Yu, who has a background in catering and has studied with an “eating designer” in Amsterdam who creates “avant-garde art” out of food that is then eaten by its beholders.
Yu, who recently hosted a gourmet soy sauce tasting, notes that even celebrity chefs such as Heston Blumenthal have incorporated artistic expression into the dining experience. For example, at his renowned Fat Duck restaurant, in Britain, one seafood dish is served with iPods that play sounds of the sea.

The motive for Kim, who plans events and workshops through her company, WKND, is to entertain while giving guests food for thought. The produce served at her dinner was procured from local organic farmers or grown by Kim herself, at a friend’s rooftop farm in Central. Guests fed each other at a previous dinner the team hosted, giving strangers an unusual bonding experience over their food. Kim says she sees a demand for healthy alternatives to nights of drinking, popular among the educated and high-earning crowd in this city and elsewhere.

“This was actually an activity that people can enjoy and learn something new [during],” she says, “and at the same time eat healthy and meet new people.

“Products, travelling – they’re more focused on the individual experience these days. A lot of products want to tell a story, for people to experience something and relate it to themselves – which is kind of narcissistic, but we are seeing more of it.”